Published in Your Sinclair #30 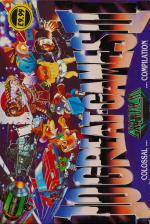 Compilations schmompilations, I hear you cry. (Or possibly not.) Yes, I know we don't usually do much on this sort of thing in YS - mainly for space reasons, and because we think you're probably keener to find out about newer games, than loads of oldies bunged out for the umpteenth time. (Tell us if you're not!) But this one, when it popped through the office letter box, really caught my eye. Basically Brian, 10 Great Games II is Gremlin's Greatest Hits from 1987, and that includes some mighty fine games.

Right, so let's hit it. (OOOF!) Oh, sorry. Now, what do you get? Ten, yes ten games, including four YS megagames and one never before released...

The third and probably the best of the Monty platformers. This time Monty is travelling across Europe, which fortunately is chock full of platforms and ladders. Loads of good jokes, and very challenging.

Bash 'n' slash game with excellent large sprites and neat backgrounds. Little else to distinguish it though, from the other 4000000000 similar games on the market.

A sort of Hive variant which involves you zooming through a network of vector graphic tunnels, avoiding hazards, a bit like Tempest in a beach buggy, if you get my drift. Not bad, but tricky.

Ah now, this is the business. A really cracking arcade adventure that actually merits the old cliché, 'state of the art'. Worth the £9.99 by itself.

With arcadey leanings which appals purists, but I rather liked it. Neat perspective graphics and loads of action.

Not bad, this urban violence game, but nothing remarkable. Unlucky enough to come out at about the same time as Renegade, with which it couldn't compare.

Breathtakingly fast platformer that's both hard and immensely enjoyable. As always, Gremlin excels at this sort of game, unfashionable though it is.

Brillo arcade mapping game, which needs fast reactions and about seven eyes. Virtually ignored when it came out, but you'd be a mollusc to pass it by this time.

Best value compilation for yonks - with four megagames to boot!

The best value compilation for yonks - with four megagames to boot!
Logout