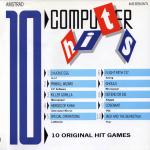 A classic platform game with 256 levels of increasing difficulty. The aim is to guide a tubby hero around the platforms on each screen, collecting the 12 eggs. Ladders and lifts connect the platforms which are patrolled by ducklings and on later stages a flying duck will escape from a cage to harass you. There are also corn piles left around that both you and the ducklings can get. Your man is safe enough dropping off platforms unless he falls off the bottom of the screen - where he dies.

This is the only adventure game in the package but, according to the Pilgrim, it's well worth having. It features lots of graphic locations to add to the atmosphere as you battle to release four heroes from their imprisonment. The action all takes place in the mythical land of Kahn as you battle to release the land from the Darkness by finding the four heroes. The usual text entry with a save game option and a score to see how well you're doing.

A version of the classic arcade game Donkey Kong in which you have to rescue a girl from the dastardly clutches of a gorilla. There are four screens on which you have to reach the top via the platforms, ladders and lifts on them. The gorilla sends many obstacles to thwart you which have to be destroyed or avoided. On the fourth screen you get your chance to bring the gorilla crashing to earth and be reunited with the girl.

This pinball table doesn't have the table design feature of Macadam Bumper but does retain some of the addictive qualities of pinball. The ball movement is fairly good although it does tend to speed up and slow down without warning. The table design is quite a difficult one demanding attention from the player and with features like rollover targets and bonuses. The background colour and the graphics as the flippers hit the ball leave something to be desired but it's still a playable pinball.

A good version of the arcade game Defender where you have to protect a planet and its scientists from an alien invasion. The scientists wander the planet surface while you protect the skies above that are filled with landers, bombers, swarmers and baiters trying to destroy you and the scientists. The screen scrolls left and right on the wraparound planet surface although the only drawback is that this is sluggish and the inertia is tough to handle.

A flight simulator that sets the task of taking off in a 737, flying over a mountain range and then landing on the other side. The display is a cockpit view of the horizon with the instrumentation below. The parameters of the flight can be varied to change the height of the mountains, length of runway, crosswinds and engine fires. Only one attempt at a landing is possible due to fuel constraints and this combined with the slow screen update can make the game frustrating. 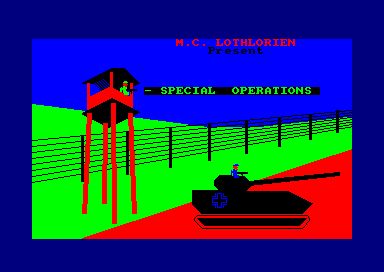 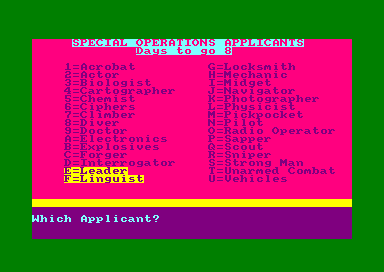 Graphically, this war game leaves a lot to be desired... but it has quite a novel objective and combination of tasks. It gives you the task of achieving one of seven objectives in respect to an enemy complex. On the simplest level you have to photograph the complex and on the hardest to penetrate it and steal some secret plans. The team you control possess different skills so that a combination of wargaming and adventure tactics are required. 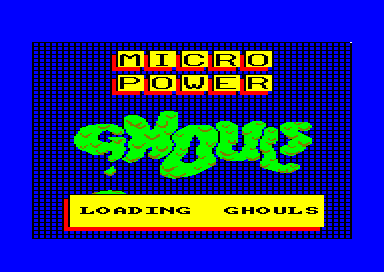 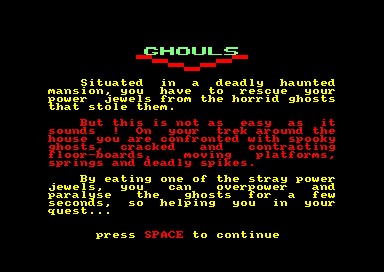 A four-screen platform game but which moves at an extremely fast pace and has some devilish adversaries. The aim on each screen is to get to the top right hand corner by jumping about the platforms. You can collect dots and power jewels on the way for points but a time limit ticks inexorably down. The dangers include a ghost that homes in on you, spiky mats, moving platforms and walkways. A very tough, fast game with good sound effects but can be very frustrating as you can die so quickly. 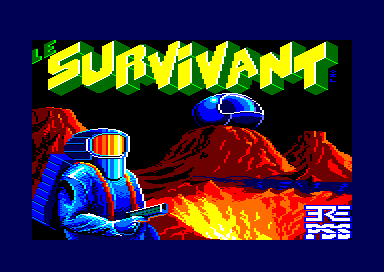 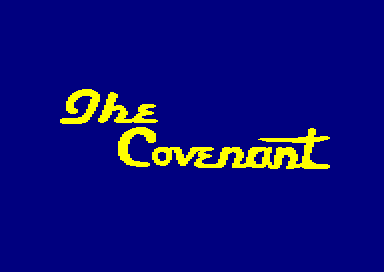 This excellent arcade adventure got a rave review in the November issue and features some delightful graphics and demanding gameplay. The Covenant is made up of 64 pieces of parchment which, as the last survivor of your race, you have to retrieve. To do this, you also have to capture all the animals living in the underground caverns to repopulate the planet surface. The animals come in four room sections and have to be anesthetized and this involves a puzzling element as you make your way around either on foot or in the flying globe. Lots to do and see in this large game. 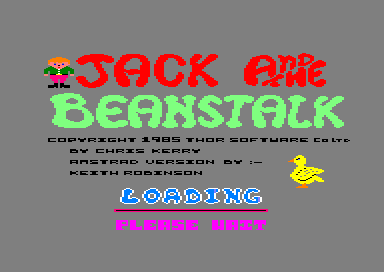 Jack has to climb several screens as he tries to get the money, golden goose and kill the giant. On each screen he will need an object to help him get through it as various insects and birds try to bring him to grief. The final screen has a time limit in which you must get an axe and fell the giant. Each screen demands timing, speed and accuracy in trying to traverse the hazards which can prove very difficult to overcome. Not many screens though and they can prove frustrating.

This is certainly the age of the compilation and although these ten games most definitely have not sold a million they combine to make a great value-for-money package, effectively costing half the price of a Mastertronic game each. There are five games on each side of the tape and a wide enough variety to satisfy most tastes.

P. 10 games for the price of one. P. Wide variety of game types. P. Excellent programs like The Covenant, Defend Or Die and Heroes of Kahn. P. Full instructions for all games. P. An excellent Xmas gift to a new computer owner.

N. Don't expect every game to be a hot one.

Whether you get the cassette or disc version, you won't have any grounds to be disappointed with this compilation on the grounds of value for money. While one or two of the games aren't exactly staggeringly good, others really are top class. The variety means that there is something for everyone, from the adventurer to the blaster.

The only problem with such products is the dilemma they pose for people who have a few of them already. But for anyone new to computer games Computer Hits will be a terrific introduction.

For anyone new to computer games, 10 Computer Hits will be a terrific introduction.