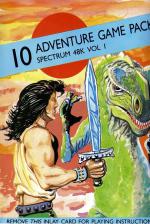 Some of Central's recent releases, both arcade and adventure, have been less than awe inspiring. Still, I'm pleased to say that this adventure compilation proves to be well above average. All the adventures here are Quill'd (some with The Illustrator too), and many bear a copyright date of 1984 and the Gilsoft label.

A Tangle Tale opens the proceedings - it's based on the characters of Lewis Carroll, and on a series of puzzles the mathematician/author published in 1885 called A Tangled Tale. The limited locations introduce you to characters like Humpty Dumpty and the White Knight, and you must solve problems so you can untie the ten knots in a piece of string you're carrying. The graphics are pretty basic, except for a lovely animated title screen, but it's more a game for the puzzlers than the adventurers.

Jason And The Fleece has no instructions, and sets you down in a fairly un-Greek main street with an inn, a hardware shop, a vet's surgery and a closed shop with a sign saying ‘Zeus and Son'. (I think we can safely assume historical accuracy has been dispensed with here.) If you knock, a man invites you inside Zeus's shop and amazingly allows you to take away a selection of goods without payment. These include a compass which, according to the program, is "brocken", so it seems spelling accuracy has been dispensed with as well. A few easy problems get you into the game - guess where you take the injured rat? And is it worth giving the gold coin you find to the beggar at the end of the mad? You bet it is. You then set sail across the seas, where too many annoying sudden deaths await you. But despite its faults I still liked the program. It's a fair size, and an ideal opener for beginners.

I didn't take to Crystal Quest. It's a travel-the-galaxies-find-the-crystals game, where you're the Captain of the USS Spectrum, whose locations you begin by mapping out. A silly sudden death spoils one of the rooms. Here there's a lever - you pull it (as you inevitably will) a message tells you that you forgot it's a self-destruct lever and your entire ship's been blown to smithereens. Now if you were a stowaway on the ship, fair enough, but a bit of an unlikely blunder for a Captain to make, surely?

More promising was Sea Of Zirun, which has you blundering round beneath the Atlantic Ocean with only an oxygen tank and underwater torch for company - well, apart from dragon tunics, mullets, mermaids and others whose territory you've invaded. A bit amateurish, but comprehensive with lots of detail, some easy and some tough problems, and you'll need to plan carefully if you don't want to run out of air and gasp your last underwater.

Time Quest naturally transports you through time, but it also transports several program bugs with you. Lots of double-messages crop up, which can easily happen with The Quill if you don't set the conditions properly. EXAMINE GRASS in one place produces "What's this you see?" Okay, but no object is produced, and THROW ROPE elsewhere produces a message on-screen for a micro-second. In any case the story itself isn't exactly inspired - search the kingdom for treasures to help the kind but poor people who've befriended you. Yawn.

Dragon Slayer doesn't sound very inspired either, but it's an enjoyable three-quest adventure, the first being 'Dragon's Lair'. I'd no trouble finding the lair, where I was promptly fried alive, so off I went up-dale and down-hill (and vice versa) collecting lanterns, matches, bronze keys and other adventurer's accoutrements. Simple but well done.

Commando is a little tamer than Elite's game of the same name - it has you invading enemy territory searching for a list of enemy agents, while Eye Of Vartan has echoes of Colossal Cave above it. The early location looked promising - apart from the slightly irritating fact that the location exits aren't given to you. No instructions either, so who knows what it's about? Rifts Of Time is about an unknown world where there are three relics of great power that you've got to find. You've then got to take them through a time portal to the god Odin. You can even use The Quill to have another character, though in a fairly limited way. Dave the Sprite accompanies you on your travels, although I was soon ready to strangle him for his limited pre-programmed range of responses. At least this one attempted to be different, even if it does suffer from an amateur adventure writer's love of unpredictable and irrational deaths. Study the best adventures, would-be authors, and you'll see that deaths are usually preceded by a warning, allowing the player to save the game. Try to keep some sense of reality, and don't hurl players over cliffs they would've spotted twenty yards away in real life. Easy deaths are an easy option - put your brain-cells to work on the problems instead.

The perfect example of this is the last and best adventure in the collection, The Hexagonal Museum, which turns you into a Pink Panther style thief who's attempting to steal the Star of India diamond single-handedly (what you do with the other hand is your own business). Outside the museum the boot of your car is well-equipped with ten items, like wire cutters, plastic explosives and a grappling iron. Unfortunately you're only supposed to carry six of them. You've already cased the museum and hidden more equipment in a store-room cupboard, but to get in you've got to scale the wall and outwit the security cameras as you jump down on the other side. Inside the museum there are guards to watch out for and beware the touch-sensitive floors. A varied selection of problems, though even this isn't fully de-bugged. Some responses are printed twice on-screen, and several of the exits in location descriptions are wrong. Despite that, though, it's a good adventure to round off a collection that's definitely value-for-money if your adventure budget's limited.

This adventure compilation proves to be well above average.
Logout