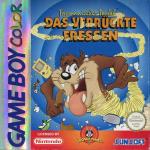 He rotates faster than a washing machine on super-spin and eats more than a fat bloke at a free pork-pie festival! Yes, we're talking about Taz - everybody's favourite gyrating goon!

In this unique game you have to guide the eternally hungry hairy one around eight massive levels, scoffing everything in sight. There's more to the game too (though not much more, admittedly) with you gaining gold medallions for munching prowess and beating up the big, bad boss guys.

At first glance, Tasmanian Devil: Munching Madness may not seem all that impressive. The graphics are a bit smaller than you expect in Game Boy Color games (probably because it's coded to work on the old-school Game Boy as well) and the game appears almost ridiculously simple. All you seem to do is run around spinning into undistinguished bad guys and grabbing the occasional bit of ham or fruit.

Give it a chance though, and Tasmanian Devil: Munching Madness shines more brightly than the sun in the Tasmanian outback. The levels are absolutely huge, and just when you think you've seen everything, you realise there's about twice as much ground or you still to cover. Fifty pieces of food are hidden in each level and you have to find every one before you can move onto the next level. Get killed and it's back to the start with a very hungry Taz.

You also have to search for five gold medallions. These can be hidden in hard-to-reach places of by fighting a big bully. And as if that wasn't enough action, you also have to work through eight of these never-ending worlds before you get to the final showdown with Taz's arch enemies Bull and Axl.

Finding the food can be difficult but to help you on your way, stand still and Taz'll jump up and down pointing to the nearest piece of food. The game soon becomes addictive as you try to find your way around the maze-like levels to get every tasty treat without losing all your energy from your regular rumbles with the local population.

On his travels, Taz gets to meet all his friends from the cartoon. Stop and chat to them and they'll give you hints on where to find gold medallions or how to beat up the bosses. you can even meet 'The King' (That's Elvis to me and you!) when Taz goes to Las Vegas.

One gripe is the lack of a battery saving mode. The password system is far too familiar on the Game Boy Color and although sometimes it works well enough, Munching Madness would have really benefitted from a mode of this kind.

This alone isn't enough to keep a spinning Taz down though! It's an odd, but strangely addictive game, that sinks its teeth into you and, once you've nibbled on it, you'll find that hours of your time get swallowed up.

Sorry Mark, I just can't agree with your comments on this game! I found Tasmanian Devil: Munching Madness to be a mite annoying! The tiny sprites are very difficult to make out on the small Game Boy Color screen and making jumps over the water was a real hit-and-miss affair.

There are far better cartoon character games out there to try - give Obelix or Mickey's Racing Adventure a try if you want a fix of great cartoon capers!

Playability 100%
This is where it's at - brilliant.

Lastability 100%
The levels are outrageously huge.