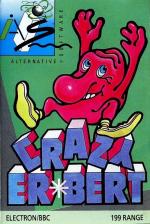 Published in The Micro User 5.08

Crazy Er*bert isa cuddly looking little character who plays the hero in this 3D Pacman-type game. He lives in a world made up of interconnected cubes and his aim is to visit each cube so that its top surface changes colour. He treats his cubes as stairways, and travels up or down them diagonally. Four keys are needed to steer him and these take a bit of getting used to.

At the start you can choose from 10 levels of difficulty and whether movement should be fast or slow. I still find the slow option is hard enough. It's an old gripe, but what a pity there is no sound-off option. The sound effects are quite adequate, but many games players need silence at times.

Er*bert does not live alone, but the other occupants of his world are all enemies. You are persistently chased by Coily Snake and Boris Gorilla. If they catch you one of your three lives is lost. Escape is provided by two elevators which return you to the surface.

If Boris or Coily try to follow, they vanish for a few vital seconds. This gives you a chance to escape, and gain some bonus points. Er*bert can also collect a Rota Hat which allows you limited flight with two extra keys required to manage the flying skills. Elevators and Rota Hats can only be used once.

To add to the problems, some unseen giant is rolling boulders down the cubes. In higher skill levels some ofthe cubes turn into vaporisers. These have a drastic effect on your life expectancy but fortunately they don't last long. Also at the higher levels, Er*bert cannot manage to paint the cubes at the first attempt. You have to apply the undercoat on the first visit and a second trip is required to put on the top coat.

To score high points you can make Er*bert pick up Boris's banana. This also causes Boris to lose his temper, but you can drop the banana with a quick press of Space.

If Er*bert manages to recolour all his cubes you move to a new and more complicated screen. There are four such screens in all which means that with 10 levels and two speeds, there are 80 possible combinations.

Back in the old days of 1983, this game would have rated as amazing value at only £1.99. Now, it is merely ordinary - a game to amuse the kids for a while with its well-drawn large and colourful graphics, but lacking any real depth. It's worth buying for its compatibility with Model B and Master 128 computers.