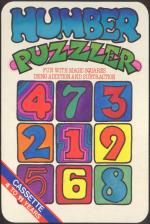 Serious educational software for the Dragon has been fairly slow to appear, and it's good to see programs like this being produced.

This is a machine-code program containing several related mathematical games suitable for primary-aged children, and an arithmetic test.

The games are based on a 3 x 3 number square. The first three are a rather curious hybrid of noughts and crosses and bingo, involving addition and subtraction, some advance planning and perhaps a little too much luck.

They can all be played by two children, or one child against the computer.

The last game involves constructing magic squares, and is much more difficult. All the games have several different levels of difficulty.

The instructions are given in a small leaflet, in equally small print. Presumably the parent or teacher reads them and then explains to the child how to play the game.

It's a shame that the clear layout and good graphics in the games couldn't have been matched in the instructions.