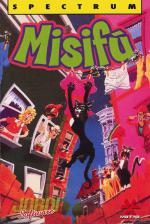 Is it a cat or a catastrophe? Matra's new furry hero Misifu is under Dave E's microscope...

There are altogether too few games where the hero is a cat, which is a little bit bizarre considering that, as we all know, these furry felines rule the Earth. Misifu is a cat on a mission. A very confusing mission, but a mission nonetheless, and, if I've understood the pidgin English translation correctly, it's a collection of sub-missions.

The first thing you notice about Misifu is that the presentation is pretty good. It has a splendid loading and opening screen and a really engaging background tune (128K only) which sounds like something you'd hear overlaid on a silent movie.

Unfortunately, that's where the good stuff ends because the game itself is absolute pants and one of the biggest exercises in frustration that I've ever had the misfortune to play on my Speccy. I've only managed to pay three of the sub-missions because you have to progress through each of them serially and, like Mikie (if you remember that classic), getting through the sub-mission is 90% luck and 10% skill, which means that when you're inevitably offed through no fault of your own, there's precious little to tempt you back for another game. Especially because you have to start all the way from the beginning.

First things first though. You access the sub-missions by climbing Misifu up several bins, onto a perimeter fence and then try to jump through the open (black) window of a 3 x 3 grid of them. If you can't reach the open one, you can jump on a washing line which acts as a conveyor belt or, illogically, sit and bide your time. The illogical reaction works better because, by the time you've tootled your way over to an open window above you, it's changed to one below you again!

At the bottom of the screen a dog runs constantly from right to left and must be jumped. If he sinks his teeth into Misifu, that's one dead kitty (and you have five, although, quite sloppily, there's no on-screen indicator of this). The bins are also patrolled by some random stationary black-demon-cat head thing that doesn't kill you, but knocks you back to the bottom of the screen. This teleports around, whacking you when you least expect it, sending you down to the ground where you have to pray you can scramble back up onto the bins before Muttley gets his teeth into you.

If you make it to the fence and through the window, you play a bizarre succession of games (that look like they are written in pure Basic!) which try to persuade you they have some connection to the life of cat. I, for one, am not buying it. The cheese sub-mission is weird enough, but the fishtank and bookshelf play like something from Cascade's crappy Cassette 50! A really big problem is the way the game registers keypresses, because it won't allow Misifu to move whilst in the air, meaning that you end up jumping straight up when you wanted to jump across. Usually this ends up being fatal.

In short order therefore, Misifu is another disappointment from Matra. The only thing I liked about it was the music; and considering the 48K version doesn't have that, that's basically to say that I liked nothing about that version. In even shorter order: A load of crap, but the music's ok on the 128K version. You can take it away now.