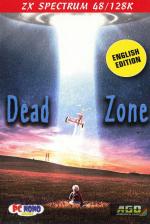 "Is that it?" was my reaction to Dead Zone, the latest physical release from Matra for the ZX Spectrum. At £7.95, I was expecting something a little bit more polished than a 'shoot the descending spaceships' game. Still, in the interests of fairness I'll say a bit more about the game. It's probably going to be hard though.

You control a cursor, a cross-hair of sorts, and the scenario, such as it is, is that you must prevent the flying saucers from abducting the stickmen at the bottom of the screen. You do this by shooting them out of the sky, hopefully before they reach the stickmen. From time to time, a helicopter gunship flies across the playing area and ejects some additional ammo (shoot it to pick it up) and a lorry trundles over the bottom of the screen with additional fuel (move onto it to pick it up).

By far your biggest problem, when you initially begin playing the game, is shooting the very stickmen you are trying to protect. Unlike in most games, where you have a plus-shaped crosshair and need to line up targets in the centre of it, in Dead Zone you have a square-shaped crosshair. It's only necessary to get any part of the square in alignment with a bad guy to take it out. Which is, of course, a boon for taking out the descending little green men... but also means that it's very difficult to pick off a spacecraft that makes it to the bottom of the screen. Sure, you can shoot it, but getting into a position where you can hit it without also taking out the stickman it's trying to abduct is near-impossible.

When you shoot one of your own men, a speech bubble "No!" appears quite prominently, leading to crushing feelings of guilt.

It's a very smooth game, largely monochrome, and the background music (on the 128K version) is good. The real problem is that it's just too simple an idea to be much fun with for long. Even the budget games of the late Eighties tried to do a bit more than just recycle the old "Lunar Rescue" format. Which brings me to my reaction to it. Is that it? The answer, regretfully, is yes.