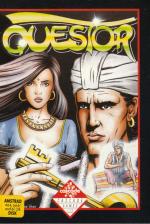 It doesn't take much to work out that you're trying to find something: the title gives that away. And you'll soon find out that you've got to do it on a flying carpet. The quest is to find and rescue the daughter of the Nawab from some nasty catacombs where she's imprisoned - and that involves solving a good many problems.

You start deep within the caves and spend the whole game flying about on the carpet. This airborne doormat is quite awkward to control and you'll die many times early on trying to master it.

The caves are inhabited by all manner of evil creatures that appear on most screens, moving in patterns up and down or across the screen The creatures either drain your energy or kill you outright. This is tough when you have only three lives. But some of the monsters can be zapped with weapons and objects found in the caves. Unfortunately finding out what does what, where and what to do about it (what?) is a matter of trial-and-error and many lost games.

There are quite a lot of objects and locations to find. Many of them are hard to get to and involve tough timing problems and removing obstacles from your path. You can carry only three objects at a time. When you come to whore the object can be used for opening a door, say - it happens automatically. There are some flashing objects that you can't pick up but which act as clues for you to work out.

The graphics and sound are ordinary with little to commend them. Most of the tasks are fairly straightforward as well, just needing a lot of blind experiment. The control is the most annoying feature: one twitch in the wrong direction can put you into the clutches of a monster and lose one of your precious few lives. There's enough challenge for ardent arcade-adventurers to plug away with, but there's nothing very special.

If you ram an alien accidentally. you will find you are stuck and all your energy drains exceedingly fast. The walls must also have some form of adhesive: you can't just glance off them - you remain firmly embedded. This game is too demanding, and it's rather old hat.

Good colour choice - everything is viable.