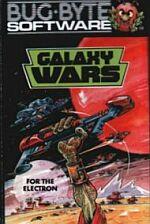 Galaxy Wars is an arcade type game with three different stages of play. The first stage consists of a row of aliens (which look uncannily like three quarters of a beach ball) that move across the screen getting lower as the game progresses. These drop bombs at very regular intervals, and are backed up by unpleasant oblong creatures that swoop down at your base. If they reach the bottom of the screen they explode, forming a barrier which limits your movement for about five seconds.

The second stage has ships which drift aimlessly down the screen dropping the occasional megatonne of missiles on their way.

The third stage is an old arcade favourite: the docking procedure. A colourful mothership eagerly awaits the company of your laser base which you move left and right with the TAB and Q keys. If you succeed in this stage, you go back to stage one, with a different coloured background and new character definitions.

When you first load Galaxy Wars, it asks you if you are using joysticks or not. I found the joysticks, if anything, made the game harder, and so I stuck to the keyboard. The thing that I found most outstanding in this game is the quality of the sound. In the docking procedure, I thought that the sound was superb. Also, there is a very fast piece of colour changing when you get blown up. So, if you are going to make a habit of getting bombed, make sure that you are wearing sunglasses before you start playing. Unfortunately however, I felt that the game had little else going for it.

As a conclusion, I would say that in the days when software for the Beeb was quite scarce, this program would probably have done well, but today, there is so much software and it is of such good quality that it needs something really special to make the buyer reach for his wallet.

This game is not bad and not brilliant - but there are much better games than this for £7.50. Interesting sound effects and quite good graphics, but this game required a little more thought at the drawing-board stage.