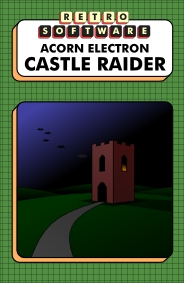 A scrolling graphic adventure of the keys-locks variety, setting you the task of exploring a huge castle and escaping with some of the treasure.

As the sun dips below the ramparts of the old town, the last of the troops file in. As they make their way through the narrow, cobbled streets, small groups of them quietly slink away into the many taverns that give this district its bad reputation. The lamps are lit and the merriment spills out onto the streets with laughing, singing, pushing and shoving. There will be trouble later, but by then you will be long gone.

It is time for the guard to change, time for the night watch to begin their duties, but they are in no hurry; though the outlaws in the countryside know the force stationed here will be no threat tonight, they gave them a wide berth during their march here. The people in the nearby villages can sleep soundly for a change.

As the members of the night watch slowly begin to take their places on the ramparts you take your chance and slip through the open gate, taking refuge in the long shadows fleeing the sunset. The few eyes looking in your direction are hardly able to make out your form as you wait for the approaching nightfall.

You recall the stories told when you were young. When the town itself was already old, the last of the elders told of a time when it was still a village, not much more than a few houses and shelters. The road that ran through it went to the castle on the edge of the wasteland that now lies derelict and deserted.

Night falls quickly in this season at the edge of the kingdom. Memories of fireside tales about the king's lost crown and the hidden treasure of the old kingdom make the journey across the plains more bearable. Soon you arrive at the outer fortifications. Crossing a bridge, you enter. As you pass beneath the outer gate it suddenly crashes into place, cutting off your exit. It was just as well you hadn't planned to return that way.

Nature has reclaimed parts of the castle, its ruins crumbling in places and crawling with creatures that people once knew well to leave alone. To make your way through it to the lands beyond, you will need to unlock the few doors and gates that still stand. Perhaps the folk tales were true and the king's treasure still remains, but survival is more important here. If you live to pass through the outer gate then the story alone will have made the journey worthwhile.

The player must help their character escape the castle, ideally with some hidden treasure.

The character may enter different parts of the castle by entering the arched doorways that can be found in various places. While standing in a doorway, press the / key to enter.

If playing the disk version, press SHIFT-BREAK. The game should now load.

This program is free software: you can redistribute it and/or modify it under the terms of the GNU General Public License as published by the Free Software Foundation, either version 3 of the License, or (at your option) any later version.

This program is distributed in the hope that it will be useful, but without any warranty; without even the implied warranty of merchantability or fitness for a particular purpose. See the GNU General Public License for more details.

The source code can be obtained from the Mercurial repository at the Retro Software site.

The sources for this game can be obtained from the Mercurial repository hosted on the Retro Software site.

You can download an archive of the current sources by clicking on one of the "bz2", "zip" or "gz" links on the main repository page.

Alternatively, you can use Mercurial to clone this repository from the command line, obtaining the full development history of the game:

You need Python, the Python Imaging Library, the UEFfile module and the Ophis 6502 assembler to build the game.

Run the build.py script at the command line, passing the name of the UEF file to create. If the file was created, load it into an Electron emulator or create a sound file with one of the UEF utilities available online.