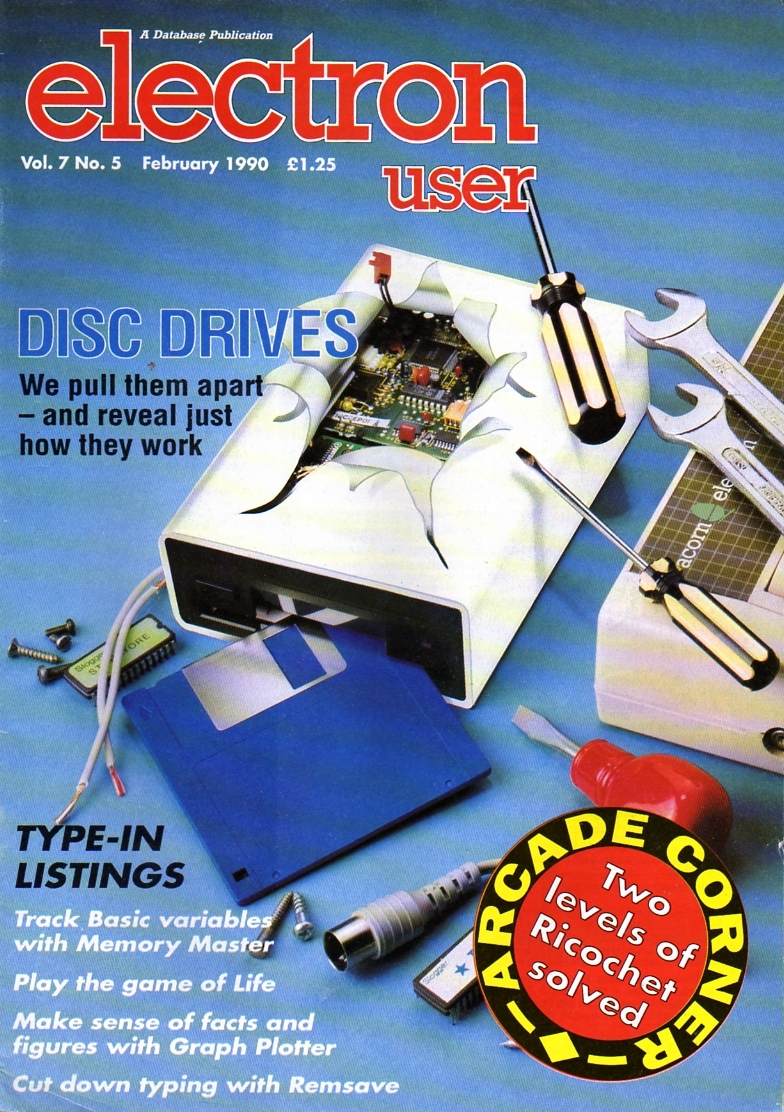 DEFLECTOR is a fascinating game that is sure to have you hooked right from the start. A target looking like a small polo mint moves slowly around the screen and a rubber ball also bounces around. What you have to do is to make the ball hit the target by bouncing it off strategically placed deflector shields.

The idea is simple, but the gameplay is maddeningly frustrating - you'll soon be tearing your hair out as the ball bounces uncontrollably around the screen.

You have two controls - the keys *lt; and > - which can be used to place an angled deflector just behind the ball. One deflector points one way and the other in the opposite direction. When the ball bumps into a deflector it bounces off in the appropriate direction. By careful placement of the deflectors you can make the ball bounce in any direction you wish, and so hit the slowly moving target. Well, that's the theory, but in practice it is quite difficult and requires a lot experimentation. Be prepared to spend the first few games just familiarising yourself with the controls.

At the start you have the option to change the difficulty level from zero (hardest) to nine (easiest). Start on level nine and master that before attempting to increase the difficulty.

John Geraghty presents an updated version of a favourite simulation

LIFE is an implementation of that old simulation originally devised by John Conway. The program uses three simple rules to simulate the growth of a colony of cells as it grows and becomes a stable body or completely dies out.

For those unfamiliar with the concert, LIFE is basically a pattern generation algorithm of extraordinary simplicity and power. The action takes place on a plane divided up into a grid of squares or cells - this Electron version is 40 by 62 cells.

Each cell may be alive or dead initially - you set this up at the start - and each one has eight immediate neighbours. The computer works out the next generation of cells in accordance with the following three simple rules

The variety of patterns that these three rules can create is astonishing. Cells swarm about to form colonies which may become stable or collapse into debris. There are even formations which creep about like amoebas, sending out limbs as they pull themselves along.

To explore the LIFE universe, type in the program and save it before running it to prevent the possibility of losing your work if you have made a typing error in the assembler section.

When you run it you will automatically enter the editor. Although only 2,480 cells are shown onscreen, the display is torrodial, or wraps around to simulate an infinite plane. Patterns going off one edge of the screen re-appear on the opposite edge.

To set a cell, move the cursor with the Z, X, * and ? keys, plus the SHIFT key if you want double speed, then press RETURN. Press RETURN again to delete the cell. You can set several cells at once by holding down RETURN plus a direction key.

Pressing S toggles the single stepping on and off. This option pauses the display in between each generation so you can study it. Press the SPACE bar for the next generation. Press E to enter and exit the editor, starting and stopping the game of life.

There are many fascinating patterns to be discovered, and to get you going, here are a few groups of cells that do interesting things. If you discover any yourself, why not send them in to Micro Messages and share them with other readers?

Logo is a fairly new language, less than fifteen years old. It was developed by Seymour Papert, a mathematics professor at the Massachusetts Institute of Technology. He investigated how cihldren learn and how computers could help them. Logo was intended to provide the ideal learning environment.

It has been, and still is, widely used in schools, particularly in primary education where children are taught simple geometry through using a turtle or buggy combined with Logo's simple graphics commands.

Unfortunatey, the educational history of Logo's development has had the effect of labelling the language as a child's toy. Most people are aware only of the turtle graphics side of the language, and this tends to strengthen the misapprehension.

It is far from being a toy and is in fact a powerful programming language which has many applications. With the exception of turtle graphics, Logo is far from easy to learn and is probably more difficult to get to grips with than Basic.

To provide a gentle introduction to this fascinating language here is a simple turtle graphics interpreter written in just a few K of Basic. The table below lists the commands the interpreter understands.

To get you started writing Logo programs there is a demonstration built in to the program. Run the program and press function key 1 - CAPS LK/FUNC+1 - to draw a picture. Here is a short procedure to draw a square:

It can be written in a more compact form using the REPEAT command like this:

Simple, isn't it? Can you draw a triangle instead? Or a star shape? Experiment and have fun.