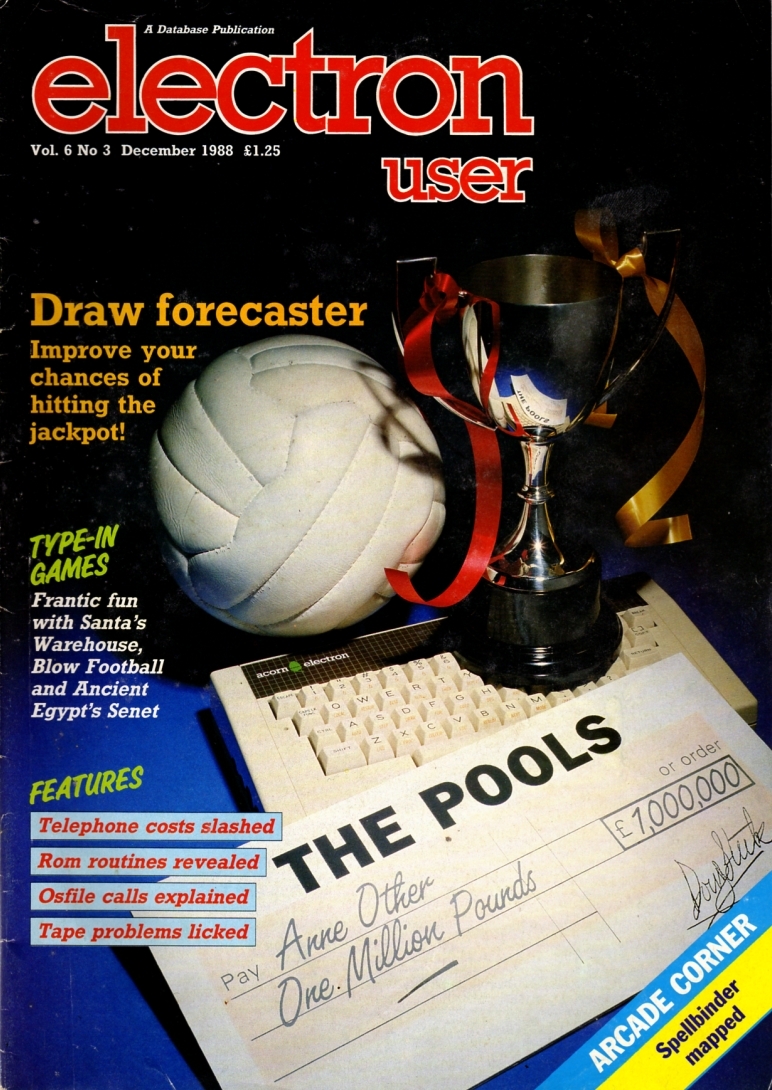 BLOW FOOTBALL is a two player game that usually leaves everybody out of breath. However, if your friend is a bigger windbag than you, don't worry - in this computerised version of the game, the only thing you might have to blow will be your aching fingers.

The screen shows a bird's eye view of the pitch, with player one going down the screen and player two coming up. The rules are simple - each player has three keys with which he can move the ball. To avoid either player having an unfair advantage, they have been set so they will not auto-repeat.

Holding down a key will not do you any good. Indeed, the only way you can move the ball is to tap the appropriate key as quickly as possible. If no keys are pressed there will be some sideways movement of the ball, due to a slight breeze in the stadium.

The first player to score five goals wins the match. A record of the current scores, along with the total matches won so far, is displayed throughout. At the start of the game you can settle how many matches the game will last, or simply play until one of you gives up with finger fatigue.

All that needs to be done now, is for you to massage your fingers and prepare yourself for some fast and furious action.

SANTA'S WORKSHOP is a game specially written for our younger readers, with a traditional Christmas theme. It's Christmas Eve, and all Santa's helpers have gone home to be with their families. Most of the toys and presents have been put into sacks or safely loaded on to the sleigh, with the exception of a few last minute orders.

It is normally the elves' job to bring the toys and presents to Santa. However, as toyland now has a new work-to-rule contract, came five o'clock it was "High-ho, high-ho, it's home from work we go". Poor old Santa has been left alone in the toy factory, and now must find the last fifty teddy bears and presents left scattered around by the work-shy elves.

The factory looks strange in the evening's dim artificial light. Some weird and not-so-wonderful things have been known to happen after lights-out. Stories of magic crackers and wild unfriendly Christmas puddings have been whispered around the workplace.

Of course, silly rumours are not going to stop our Santa collecting all of the teddy bears and presents - some children will have no Christmas without them. So, with your help to guide Santa around the factory there will be a Christmas for everybody after all, won't they?

When your child has solved the game you may be feeling devious enough to want to set an even harder challenge. Alternatively, if your child keeps getting stuck perhaps a simpler version may be in order. The layout for the screen is taken from the data statements found at lines 3240-3410, and it a simple matter to change these values to ones to suit your needs.

The playing area of the screen is mapped as an 18 x 18 character matrix, and care must be taken to ensure that your design is also of the same dimensions. Also take particular care that each character used is placed in a position that will reflect its purpose in the game. That is to say, there would be no point placing a space at the edge of the screen as you may be able to walk right out of the game.

The table below shows the data numbers used in the program, along with a brief description of each character's purpose:

There are fifty toys and presents to collect - remember to include the same total of teddy bears and presents in your own versions. This number can be altered by changing the 50 held in line 2020.

SANTA'S WORKSHOP is a 100 per cent machine code arcade game, written by Alan Weatherill with the aid of the many powerful sprite, map, scrolling and score routines from Roland Waddilove's Sprites series which ran from February to July 1988 in Electron User. These are now available on the Arcade Game Creator tape.

Arthur Lindon introduces an ancient board game from the Middle East

SENET is a two-player board game which was popular in ancient Egypt - there is evidence from tombs that it is well over 3000 years old. It was played by all classes. The aristocracy played it on fine boards made of rare woods, ivory and faience (decorated earthenware and porcelain), while the peasants may have played it on nothing more than a board marked out in the sand, or scratched on a stone, using pebbles for counters.

It is basically a race game for two players - rather like Ludo - and each player tries to move all his counters round the board and on to the last square where they are removed. Each player has five counters, either all red or all blue.

The playing counters move over the track marked out on the board as the ox ploughs - first to the right then to the left and so on. The track squares are labelled A-Z and 1-5 on screen, and you progress through the alphabet and then on to the numbers.

Initially the counters are placed alternately red and blue on the first ten squares. The players' colours are determined by throws of the dice.

To start the game, the players each throw the dice until one of them throws a one. This player has the square blue counters, and the other has the round red ones. The blue counter on square J is automatically moved to square K, and after the first move blue continues to throw the dice.

The second player (red) must make his first move from square 1, or if the counter on that square has been moved by blue, from the next lower square containing a red counter, but with subsequent throws of the dice may move any of his playing counters. Each turn ends with a throw of two or three.

Two counters cannot occupy the same square and if one lands on a square occupied by an opponent's counter the latter is said to be under attack and is moved back to the square just vacated by the counter in play. In other word, they are exchanged.

The five numbered squares at the end of the track have special significance. Square two marked with an X is a trap. Any counter which lands here must return to the first vacant square on the board and begin the journey again. Squares one, three and four - marked with hieroglyphics - are haves where counters are not vulnerable to attack.

If it is impossible to move any man forward the turn ceases. Pressing Z will pass the turn on to the other player unless there is a counter that could be moved, but would fall into the trap (X). Such cheating will not succeed, and the counter will be moved back to the start in the normal trap sequence.

When a player has moved all his counters into the last (exit) row, he may take them off by landing them exactly on the last square numbered five. If any of the counters on the exit row are attacked or thrown back to the first or second row, the counters of the same colour which remain on the board may not be taken off until the lagging counter returns to the third row.

The player who first moves all his counters off the board is a winner.

It sounds a very complex game, but surprisingly, is quite easy to learn. If you're not sure which counter to move try pressing any of the keys with one of your counters on. The game is well error-trapped and won't let you make a wrong move.

The number of squares you can move a counter is determined by throws of four two-sided dice, and these are unusual. One side is read and the other white and the scores produced are as follows:

The probabilities of these scores occurring are four, six, four, one and one respectively, out of 16 throws. This has been verified by practical experiment to be very accurate over a large number but, of course, may not appear so over a small quantity.

In a nutshell, move your counters round the board to the number five square. You can land on an opponent's counter on its own, but not if there are two or three in a row. You can jump over any counters in the way, except when your opponent has three in a row.