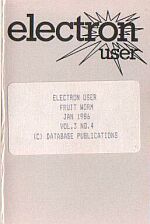 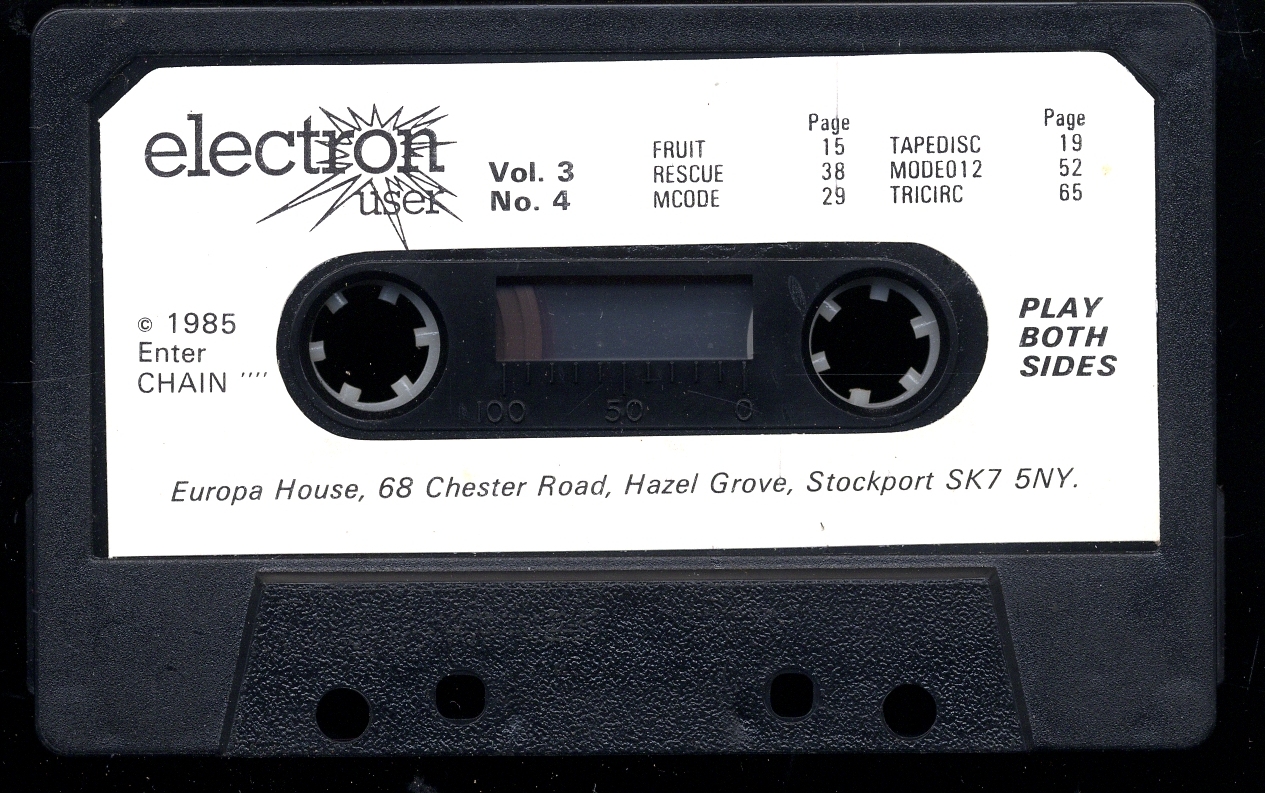 Conserve nature - help this poor worm round the screen as it eats fruit and avoids rocks, the outer fence and its own tail.

A bonus is awarded at the end of each frame and an extra worm is awarded for every 50,000 points scored.

The game should pose no problems to enter, but it may be advisable to save it before running as it contains a lot of machine code.

All the instructions and movement keys are contained in the game itself. So wriggle off...

Helicopter Rescue is a game based on the rescue of two men whose boat has become stranded on rocks. You, as the pilot of the helicopter, have to rescue the men and land them safely on the cliff top.

It is not a fast-action game, but needs concentration and skill, especially when the wind speed increases, as it does each time you save the men.

At the beginning, brief instructions are given, and the Electron draws a random pattern of rocks and a cliff. It places a boat and the two men somewhere on the rocks. One of the men will always be in a position that can be reached by the helicopter.

The Electron then selects a wind-speed and direction - at first you will be told the wind direction, but later you will have to work it out for yourself.

First, you must position the helicopter over the boat - it must, obviously, be facing into the wind to hover, and the stronger the wind, the more power will be needed to maintain the hover.

The wind gusts as well, so the power will have to be constantly juggled to keep the helicopter steady.

Go down as low as you can with the helicopter, without touching the rocks, and lower the winch.

When you touch one of the men with the end of the winch, he is secured and you can then winch him up into the helicopter, fly back to the cliff, and lower him on to the cliff-top before returning for the second man.

If, during the rescue, the winch touches a rock, the winch breaks and is lost.

If the helicopter touches the rocks, it crashes, and if you try to move too fast with the winch down it becomes tangled in the rotors, and again the helicopter crashes - and you only get one chance!

Sometimes the men will be in a position which necessitates a long winch being used - for example, right at the foot of the cliffs.

Once the winch gets over a certain length, it starts to swing, and the stronger the wind, the more it swings.

This can make the rescue very difficult, especially if the casualties are down between two rocks.

On the other hand, sometimes the only way that the men can be rescued is by swinging the winch on purpose.

Another way in which men in apparently inaccessible positions can be reached is by turning the helicopter around, as this slightly alters the position of the winch.

The helicopter can fly right up to the edges of the screen, but if you stay at either edge for too long, the helicopter will crash.

If you crash or the winch breaks, you are given the opportunity to play again, with the wind-speed roughly the same as before.

If you successfully rescue both men, you can play again but this time the wind-speed increases.

When the wind gets up above about 60 knots, you really have to have your wits about you. Actually, you can cheat - just alter the value of L% in line 90 to roughly the wind-speed you want.

At the end of each game you successfully complete you will be told how long it took you to rescue the two men, and the lowest time so far. A time under 100 seconds is good - under a minute is excellent.

HELICOPTER RESCUE will take quite a while to get used to, but don't despair - RAF pilots spend months training...

Once you do get the hand of controlling the helicopter, try to increase your speed.