Lucasarts, kings of the point and click adventure, are back with Thimbleweed Park. But from a promising start, Dave E grew slowly more despondent as he played it... 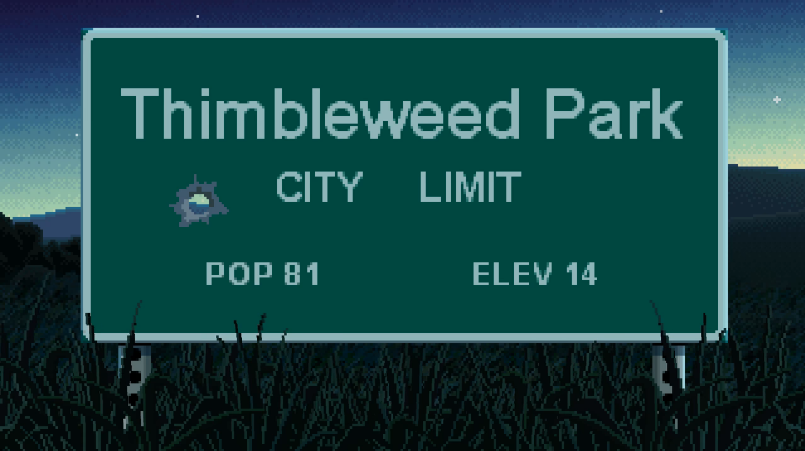 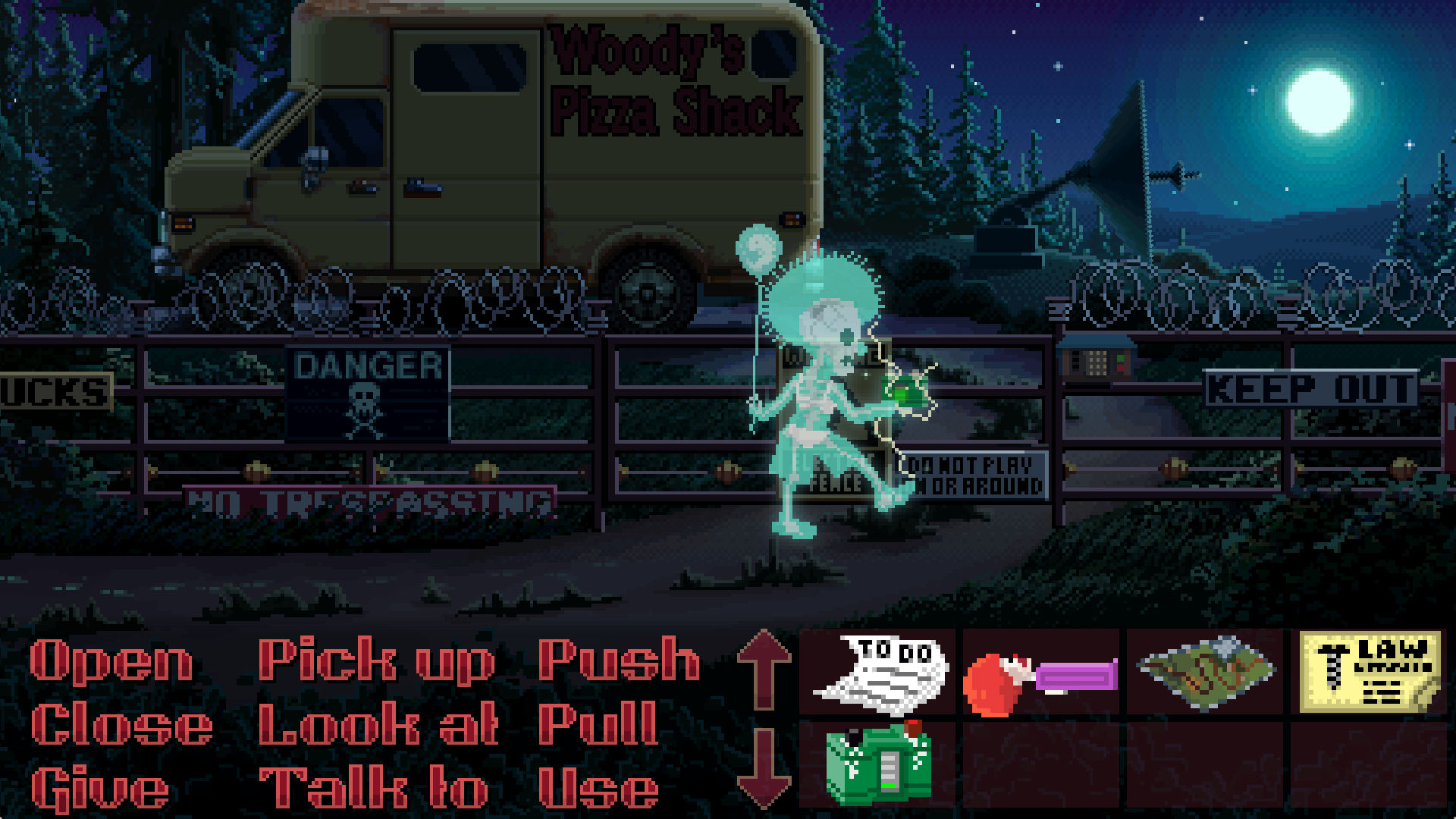 Thimbleweed Park is a Lucasfilm point and click adventure, released as a physical version for the PlayStation 4 by the aptly-named 'Limited Run' games. Lucasfilm's two 1990 graphic adventures about Monkey Island are still remembered fondly by all those who played them, whilst the original C64 version of Maniac Mansion now fetches north of £200 second hand. So, as long as the game within the box lives up to expectations, PS4 Thimbleweed Park (at £39.95) is guaranteed to increase in value. And with the game designed by the same team behind all three of those classics, you'll probably imagine there's very little that could go wrong.

Well, yes and no.

Thimbleweed Park starts off promisingly enough. You take control of a foreign businessman by a bridge on the outskirts of town but only for as long as it takes you to master the tutorial; after which he's promptly deaded. A pair of crack detectives, who bear something of a resemblance to The X Files' Mulder and Scully, then turn up to muse over his dead body and explore the county of Thimbleweed. You can switch between them with a tap of the controller's R1 button, and the town of Thimbleweed slowly opens up to you as you make progress.

The first thing you notice about Thimbleweed Park is what a nice-looking game it is. All the background pictures and characters are made up of suitably "chunky" sprites, very reminiscent of the style of art from previous Lucasfilm classics whilst at the same time taking advantage of modern effects available when running on hardware as powerful as the PS4. As you wander the streets, passing under streetlights or walking past the glow of Sam's Diner, there are subtle differences made to the shade of the character you're in control of.

The next thing you notice is the high level of interaction that you have with the people you meet. Thimbleweed Park has a ton of eccentric residents. None of them ever seem to sleep, and many of them need to be manipulated in some way to make progress with the 'investigation'. You can 'talk to' almost everyone, including machines (!). Characters include a homeless man, a vacuum tube assistant, a waitress, a postal worker and two plumbers dressed as large pigeons. This is both a blessing and a curse, affording you a great many ways to advance the plot but sometimes at the expense of keeping you on track with a logical progression of the puzzles. I'll say more about this later.

Lucasfilm's graphic adventures are well loved by many because of the sense of humour that runs throughout them. Unfortunately, although Thimbleweed Park tries hard, it's not funny. Which is a shame because it does occasionally set up some quite familiar styles of puzzle, only to waste its opportunity to make you laugh. For example, in the original Monkey Island, your protagonist would-be pirate was able to visit a bearded shopkeeper, ask him for a favour to make him leave his store and then attempt to rob him blind. Attempting to leave the store with his ill-gotten gains, however, would be in vain. The beardy-weirdy would be hiding behind the door and put an end to your life of crime with the cutting "Aha! Caught you, you shoplifting little weasel-boy!"

Thimbleweed Park does something similar with an early puzzle in which you need to steal a map from the local newspaper office whilst under the eagle-eye of its astute, and constantly-typing, editor. Having had one of the detectives issue a false report over the town's police scanner system, the Editor will promptly leave to investigate. The other will then be left alone and finally able to remove the map from its frame. Attempting to leave with it, however, echoes Monkey Island, with the Editor appearing again, and forcing you to return it. But, unlike Monkey Island, the opportunity is wasted to make you laugh by the complete lack of manic indignance on her part.

That said, Ray (the 'Scully' character) will likely worm her way into your affections quite quickly. Her flat, emotionless delivery of many of the more ridiculous lines of dialogue is its own wry type of humour. One of the parting shots you can issue to many of the suspects is "Don't leave town. I've got eyes on you." (The response of some characters to this is a blunt "Yeah, whatever.") Rayes (the 'Mulder' character) can also choose to issue the same dialogue during his interrogations too, but he exhibits a chirpy optimism throughout. I much preferred playing as Ray over Rayes.

Initially, therefore, Thimbleweed Park is quite a simple premise. You must control the two Federal Agents and uncover the murderer. Tasks include photographing the body, swabbing the blood, identifying the likely suspects, talking to the town sheriff (and the coroner) and slowly gaining an appreciation of just how many robots there seem to be in this town. This is the part of the game which is the most enjoyable. It's classic point and click fodder, with careful exploration of each location with the "mouse" pointer often showing up some item that can be collected or used. There's also a few early 'switching' puzzles that I found quite interesting to work out - when Mulder finds himself locked in the sewers with only a payphone stating "In emergency call X", it is Scully who must work out what X's number is before you switch back to Mulder to dial it in.

If you're familiar with Lucasfilm's Day Of The Tentacle, you might recognise this switching between characters and enjoy the 'imputed knowledge transfer' as a result. I have to say, however, that I find it a bit odd when one character escapes from a "prison" in this sort of way. I would prefer realism (i.e. Mulder rings Scully by referring to the number on her business card) over telepathy (i.e. Scully somehow just 'knows' she must look up a particular number in a phone book for no particular reason). Still, as long as the puzzles remain largely easy to deduce, it's by no means a killer blow for the game itself, just a bit of an irk.

The real trouble is that, as the game progresses, it begins to get steadily more complicated, to the extent that the disparate stories overwhelm the narrative with which the player has become familiar. There's a potty-mouthed clown, Ransome, who lives in a circus trailer on the outskirts of the town. He's initially introduced via a flashback sequence, and is the type of character who [beep]ing speaks like an arrogant [beep] who's [beeped] off with the [beep]ing world. This is not only not funny, but gets old very fast.

Then there's Dolores, a geeky youngster who lives in a mansion with her father Edmund and her evil Uncle Chuck (A reference to the evil Pirate Le Chuck of Monkey Island). Another long flashback sequence introduces this happy, sprightly child who dreams of becoming a game developer with Mucasfilm Games. And, subsequently, there's yet another flashback scene where Edmund (that's her dad, in case you've forgotten already) is killed off whilst staying at the very same hotel as the initial murder victim.

From being able to switch between Mulder and Scully, you are, by parts two and three of this seven-part adventure, able to switch at will between these additional three characters - Ransome, Dolores and Edmund. After he is killed, Edmund becomes a ghost who haunts the hotel and can float around but can only interact with others by 'freezing' drinking fountains and 'zapping' electrical equipment. To solve later puzzles, you need to utilise one or more of these characters in some extremely obscure ways and the game steadily veers more and more off-course. There are some good plot twists - discovering the truth about Mulder is one of them! - but generally I became bewildered about halfway through part four. I didn't care about the predicament of the foul-mouthed clown, and I found anything involving ghost Edmund to be beyond tedious.

And, again, I come back to the 'imputed knowledge transfer' as a big problem in this respect. Ghost Edmund - whom none of the other characters even know exists - is required to solve a succession of puzzles to assist in solving the game. On one occasion, you must take control of him to turn off a fan in a factory so Mulder (or someone else) can squeeze past it, and then turn it back on again. There is, for Ghost Edmund, no motive for this action at all, and Mulder would in no way know why the fan stopped, or who stopped it. Now I suppose you could argue that the player could logically deduce that he was only able to switch to Ghost Edmund in order to assist Mulder but is that really logical? To my mind, it's almost like the game is too clever for its own good. Games like Monkey Island II had some obscure puzzles, but at least all possibilities were confined to the actions of one character.

And the ending of Thimbleweed Park? Well, I'll give it one thing. It is dramatic. But let's also say it's a lot more baffling than that bizarre ending to Monkey Island II!

Overall, well, Thimbleweed Park is like a movie, but one of those ones where you walk out scratching your head, searching for a bit of meaning to it and wondering whether you missed something. It has certainly got its high points - brilliant graphics and an epic (and often quite tense) soundtrack are just two of them. The ability to play a 'casual' version (where the solutions to the puzzles are slightly less obscure) is also good.

For the first six hours I really enjoyed almost every minute of play. But it gets lost halfway through and it ultimately ends up being far too complex and weird to really be considered either fun or truly engaging. What a shame.